Carn Verdon Boy (by: Ferdia & ex: Carn Lady Ash) had a super weekend competing at the DI Winter Final Championships, where he won the Novice catergory 2 Championship and was Reserve Champion in the Elementory and to top it all off he was the highest placed Connemara pony at the show. Some achievement for this 8 year old gelding who only started his dressage career four months ago…. We look forward to following Carn Verdon Boy (aka Darcy) and Alana in the future. Well done to all involved, Alana, Judy & Siobhan Cazabon and the amazing team at Cleggan Beach Riding Centre. Owners Deirdre and Joan Geoghegan from Oughterard, are delighted and thankful for all the hard work Alana and her team have put into Carn Verdon Boy.
Also competing on the day on another Connemara pony was Sille van der Wilk who won the Premlinary Championship riding Judy Cazabon and Enda Keane’s connemara pony Kinvara Tan (by: Streamstown Mickey ex: Camus Abbey) 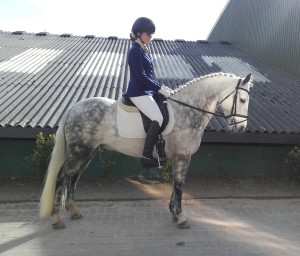 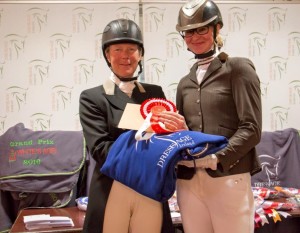 Sille getting presented with prize for Preliminary championship