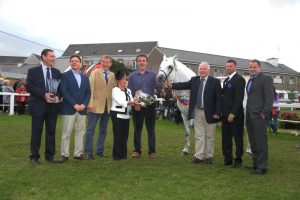 The 2013 Connemara Pony Festival was a great success. The festival attracted a huge number of visitors to Connemara. A huge thank you must go to everyone who contributed to making the festival such a success.

On Sunday afternoon local author Nicola Heanue launched her third book in the “Milly the Connemara Pony” series, to lots of very excited children at the Showgrounds. Claudia Staunton from Recess was crowned the 2013 Connemara Pony Show Queen on Sunday night.

A number of studs in the Moycullen area were visited on Monday followed by a reception sponsored by Dooleys Bar in Moycullen. On Monday evening a traditional Irish session as hosted by Griffin’s Bar in Clifden.

Tuesday was International day and in the morning the ICCPS delegates held their annual conference. The Abbeyglen Castle hotel hosted the an International Reception on Tuesday evening, where Ms. Pat Lyne was presented with the Michael O’Malley award for her contribution in promoting the Connemara Pony internationally.

The Green Hunter competition for four year old ponies took place on Wednesday morning and was won by Glencairn Ivy owned by Joan Dahill and ridden by Pauline Dahill. In the afternoon Gerry Whyte and his pony Scoby of Sleehaun secured victory in the loose jumping competition.

The winner of the seven and over stallion class Gurteen Cathal, owned by Kevin Bolger and bred by Cathal Mullen was winner of the confined championship and went on to win the overall Supreme Championship. In reserve place in both the confined and supreme championship was Kingstown Diana owned by Malachy Gorham. Celebrations continued in the Station House Hotel at the annual showdown.

The highlight of the day was the Puissance competition and crowds flocked to the Showgrounds to see Susan Oakes set a record for the highest height jumped by a Connemara Pony side saddle. Susan set the record at 1m 35cms riding the fantastic Connemara stallion Bobby Sparrow Blue, owned by Patricia Dalton. The crowd watched in awe as Susan and Bobby Sparrow Blue cleared the wall. Christine Molloy riding Doire Mhainigh Earl won the Puissance competition clearing an amazing 1m 63cms, the highest height yet in this competition. Doire Mhainigh Earl is owned by Mary Doyle.

A parade of champions set off after the Puissance competition led by the team of four Connemara ponies who had travelled from Germany to give a driving demonstration. The Connemara Pony Show 90th birthday celebrations took place on Friday evening at the Station House Courtyard with live open air music. Connemara Pony Sales were held in Clifden Mart on Saturday and Sunday.

A huge thank you must go to everyone who helped make the festival such a success. Special thanks to our judges, stewards, office staff, sponsors and volunteers. The 2014 Connemara Pony Festival will run from the 17th to the 24th August.