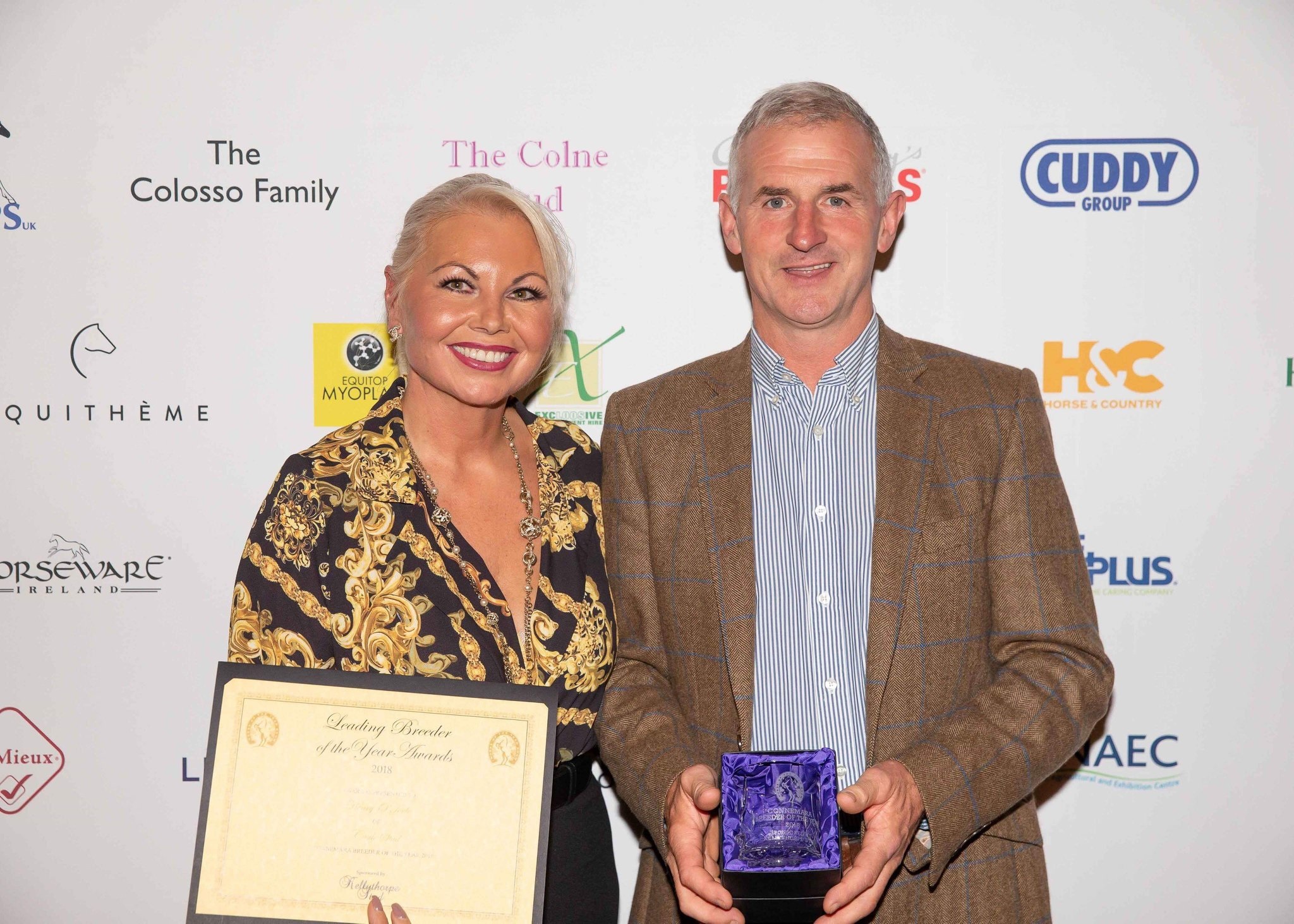 We would like to congratulate Henry O’Toole and his family on winning the “Connemara Breeder of the Year Award” at the recent Horse of the Year Show (HOYS). Such a wonderful achievement and a great reflection on the quality of ponies bred under the “Castle” prefix. Castle Connemara Ponies
Well done again on a fantastic achievement and wishing you continued breeding success for the future. Henry and his family travelled to HOYS to receive the award. The HOYS Leading Breeder Awards series is kindly sponsored by Kellythorpe Stud
Henry pictured  receiving his award from a representative of Kellythorpe Stud

Dreams really did come true for Cashelbay Stud at this years Horse of the Year Show in the UK when Michael Harty rode the winner in the ridden Connemara class at the Horse of the Year show on Cashelbay Rocket. To the best of our knowledge Michael is the first Irish rider to win this class on an Irish bred pony.
Cashelbay Rocket was bred by Robbie and Barbra Fallon on the family farm in Athenry Co Galway. Not alone did they breed this stallion they also bred both the dam an…d Sire, Cashelbay Misty and Cashelbay Cruise. We remember Cashelbay Cruise as he was a regular stallion on the show circuit clocking up many great wins and championships. Cashelbay Cruise is a full brother to the famous Stallion, Cashelbay Prince, who won the stallion class in Clifden in 2017 and coincidentally qualified for the same ridden class as Cashelbay Rocket at Horse of the Year show in 2009.
Furthermore Robbie and Barbara Fallon are also the breeders of the ever consistent Cashelbay JJ (Castleside JJ x Ballybawn Cashel) winners of the 153cm WH, ridden by Lucy Eddis.
Well done on a fantastic achievement and wishing you continued breeding success for the future.
Pictured below: Cashelbay Rocket and Michael Harty

Father and Son compete at HOYS

Heartiest congratulations to Joe Burke on qualifying both father and son, Banks Timber and Aniar Cashel for the recent Cuddy class at Horse of the Year Show (Hoys). It’s the first time that father and son of any breed have qualified for the Cuddy in-hand championship in the same year.  Well done on a fantastic achievement and continued success for the future.