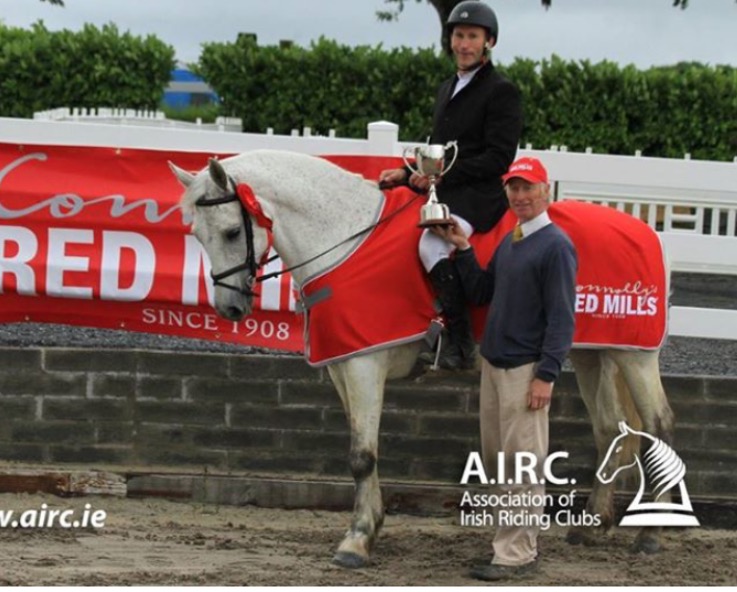 This super combination won the Connolly’s Red Mills Intermediate AIRC National Showjumping Championship at Mullingar Equestrian Centre on the 10th of July last.  They beat a field of 82 riders (mainly riding horses).  Everyone who went clear in the first round had to then jump against the clock and the twenty fastest times qualified for the jump-off.  Pat and Shadow finally triumphed in a very exciting finish beating his nearest competitor by a mere one hundredth of a second.

Pat trains with Judy Cazabon of Cleggan Beach Riding Centre and Owen Horan in Claregalway. Judy considers Pat and Shadow to be one of the most satisfying pony and rider combinations she has worked with.  “Pat is not afraid to put in the work required to succeed in this sport.  He and Shadow started as a very successful dressage combination – winning the Sportsman’s Class at the National Championship in Cavan in 2011 and playing a key part in the Connemara Pony Musical Ride at several big venues around the country including the Clifden Pony Show.  Competitive dressage lost him to showjumping but he still recognizes the value of time spent schooling for suppleness, attentiveness and success.”

Pat has been selected on the Springmount Riding Club Team to compete in the RDS next Sunday in the Riding Club Championships where we hope they again fly the flag for Connemara Ponies and riders. Best of luck Pat.