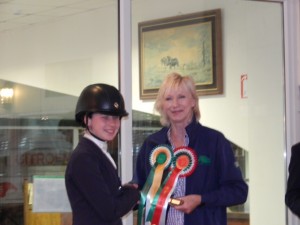 Blackwood Dancer, by Ferdia ex Dancing Queen by Mervyn Pookhaun was bred by Anthony and Janice Linden from Clane, Co. Kildare. He was shown at Connemara breed shows in the UK, before he was bought by his present owners, Judy Cazabon and Enda Keane of Cleggan Beach Riding Centre.

He was brought out to a few ridden Connemara classes the year he was bought, but he was a worrier, and he got very nervous in both the show ring and the dressage arena, so he was given a long break out on grass. Last year Alana, (Judy’s granddaughter) decided that she would try him at dressage. He started at preliminary level in February 2013, and got over 78% in a test at his FIRST show. Hard work and determination paid off, when he was awarded the Abbeyleix Owen trophy for the highest placed Connemara at the Dressage Ireland National Winter Finals, and at the National Championships of 2013. After the Championships, work continued towards Medium level, and he qualified at that level to go abroad with the aim of qualifying for the Pony European Championships. Alana and Dancer travelled to the UK in March, and competed at Addington Manor, where they achieved their qualifying score for the Europeans.

His story is a testament to the Connemara Pony for its trainability, and its suitability as a dressage pony, as it is a huge achievement for a pony to get to International level in such a short space of time. Blackwood Dancer is continuing to improve, and has become a much more settled and happy pony. He was once again awarded with the highest placed Connemara award at the 2014 Dressage Ireland National Championships at Cavan Equestrian Centre.