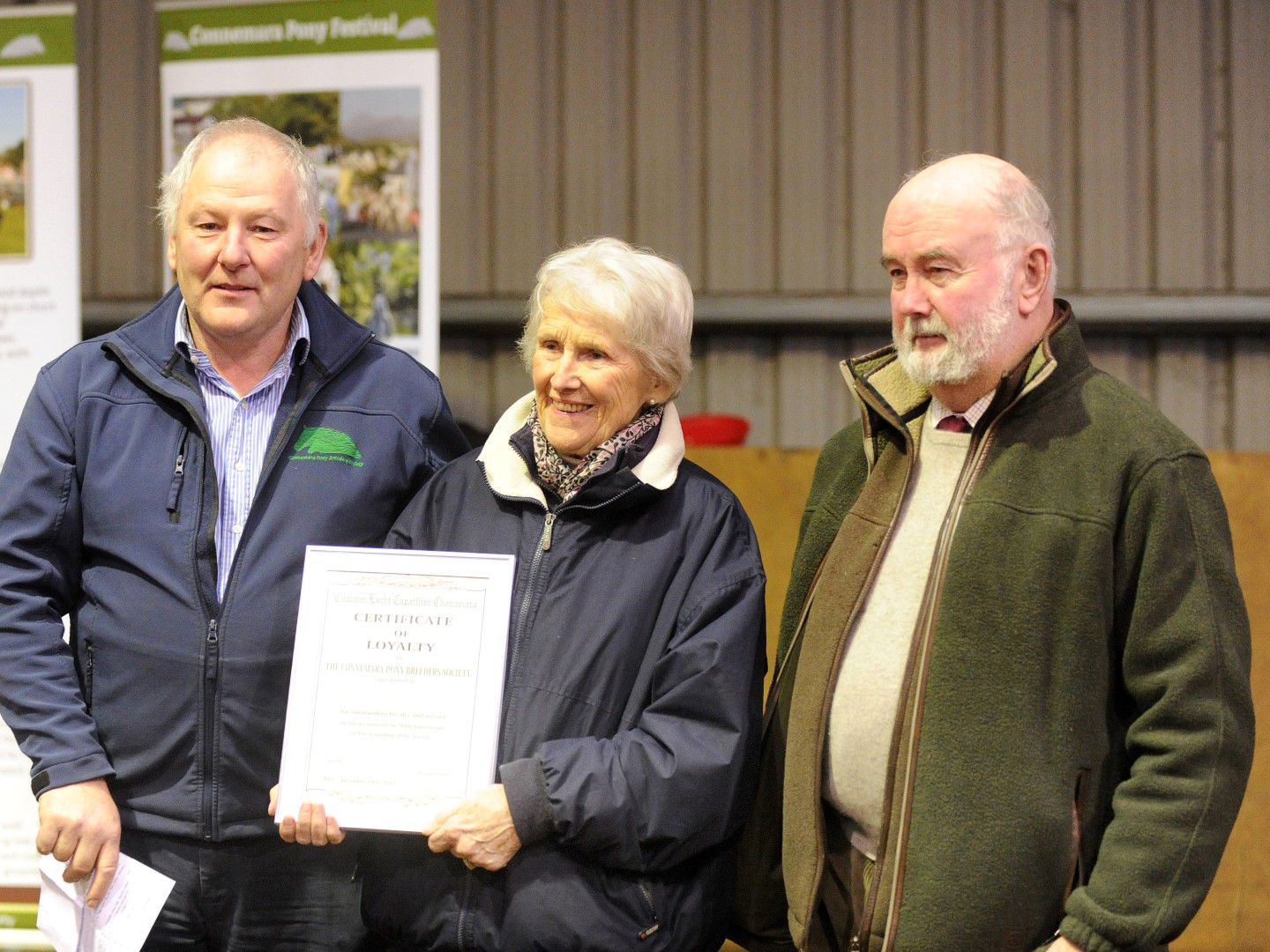 Christmas came early to Connemara pony breeders who gathered at Carey’s Equestrian Centre in Creagh , Ballinasloe on Saturday to celebrate the founding of the Society on Dec. 12th 1923. The organisers had said they wanted a feel-good, celebratory atmosphere and they certainly got that with the mulled wine flowing freely from Pauline’s ‘cave’. There was also a pig on a spit, Christmas cake and a massive birthday cake made in The Bread Shed in New Inn. A feast for all to put everyone in a good mood.

The serious part of the day took place first with the two foal classes. 13 of the 16 entries were forward for the colt foal class much to the organisers relief because of the gale force winds and torrential rain that threatened the turn out. Best colt and winner of the ‘Irish Dragoon Trophy’ was Athlone man Lorcan Glynn’s Knightbridge Prince. By Rathlacken Cascade out of Slievemore Lucky, this young pony has great presence and real show quality. The winning filly foal, Hilltop Misty, a recent purchase at Clifden Mart belongs to Jim Mullaney from Moycullen. She is by Kilmore Diamond out of Hilltop Siobhán and won a magnificent class of twenty two fillies (out of 27 entered) to win the Eileen Alanna Trophy.

It was fitting that Frank O Malley came from Rosmuc to present both trophies, named after his father’s two ponies of Olympia 1912 fame. It was an astonishing show of foals, weaned, well mannered and in wonderful condition.

Next up, without delay, was a vibrant display of sean-nós dancing by Maeve O Neill and Ronan Nee to some virtuoso accordion playing by William Mulkerins. There followed a clinic by Clare Oakes, (who had judged the foals) and Denise Norton. Fiona Donohue of Parkmore Stables provided them with four geldings as they assessed them in detail and answered questions from the audience. Then came a Dressage Display by Mary Mitchell, set to music, on her homebred Western May which thrilled the audience.

The Show was then opened by Seán Kyne T.D. whose grand mother Annie bred Helpmate the dam of Island Earl to whom French breeders owe so much. In his address, in which his familiarity with the breed was evident, Seán also launched The Connemara Pony—celebrating 90 years. This beautiful compilation will thrill everybody, regardless of their interest in ponies, packed as it is with stunning shots of ponies in various locations around the globe. Some ponies frolic in Nordic snow, some go herding in the Rockies in Idaho, one takes cover from the Australian sun under a gum tree while another sets a side saddle record over a puissance wall in Clifden. There is also some text to tell the 90 year story as well as many well chosen sayings and proverbs. The contributing photographers include such names as Gustafson, Lehmann, Petch, Fred the Cat, Harries and Pitkanen. A beautiful, worthwhile production and one that every enthusiast will covet—for Christmas. On sale from the office.

Certificates of Loyalty to the Society were presented to Elizabeth Petch and to Stephanie Brooks (in absentia) for their long  and productive membership of the organisation. Certificates of Loyalty to the Pony were presented to three families who kept the same mare line for over 80 years. They were the Sullivan family of Lissoughter, Retreat(320), the Keaney family of Murvey, Silver Spray (328) and the Griffin family of Screebe, Furnace Lass(366)

As the presentations were finishing and the giant birthday cake was being enjoyed, Santa on a gorgeous white pony entered the arena to shrieks of delight from the children. Not many Santas ride as stylishly as this one, last seen in Goulane near Clifden.

Next in the arena was an exciting obstacle race run by Caitriona Goaley, some more music and dancing and finally a Fancy Dress and Lead Rein class to bring the curtain down on a great day.

It was the first Christmas venture and congratulations to the Performance Committee for taking on the task. No doubt it will become a permanent fixture to fill those long six months from October to March