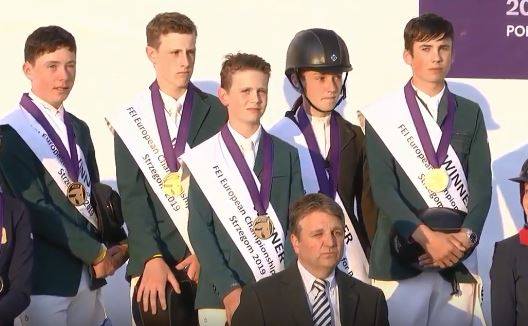 Two Connemara ponies featured on the winning Irish Team who beat off  Great Britain in the jump off to secure the gold medal position on the podium in Strzegom, Poland. Cul Ban Mistress and Ardfry Skye were flyng the flag for the Connemara Pony. Ardfry Skye was ridden by Niamh McEvoy from Omagh, Co Tyrone finished in 9th position in the individual showjumping. Ardfry Skye is owned and bred by Claire Crawford , Co Galway and is the 2007 ex: Ross Castle Ardfry Fushcia (Abbeyleix Owen) and by: Cashelbay Prince (I Love You Melody).

The Irish Eventing team also featured a Connemara pony with Fiona’s Fionn (2008 ex: Gortnaphisey Fiona (Carrantubber Lad) and by: Monaghanstown Fionn (Abbeyleix Fionn) owned by Maria Tyrell and ridden by Grace Tyrrell stood in forth position after their dressage and finishing up in third position after the showjumping. Fiona’s Fionn and Grace Tyrell finished the best of the Irish in 11th in the Individuals. The Irish Eventing team is managed by Becky Cullen.