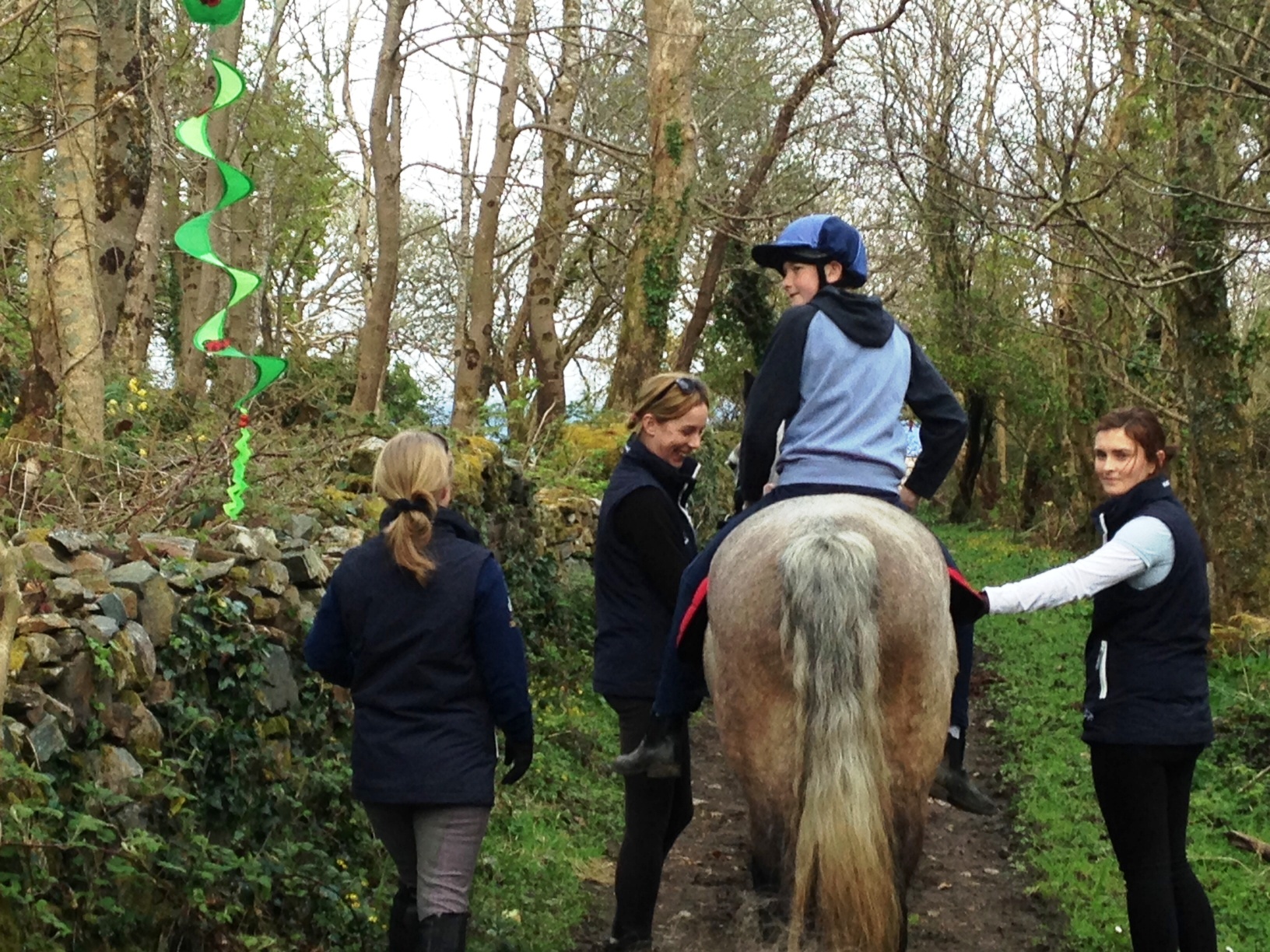 The look of contentment and joy on Jack’s face as he petted the pony’s neck said it all.  Jack is 7 years old and has autism.  This was the first time he had been astride a Connemara pony and it’s an experience he’ll never forget.

The gathering of families and friends at Errislannan Riding Centre on the beautiful, sunny afternoon of Good Friday provided an excellent opportunity to experience at first-hand what therapeutic riding (TR) is all about.  The group of trainee TR coaches from in and around Connemara currently coming to the end of a year-long training course  explained how TR works.   It is essentially a form of therapy which results from the response of the rider to the unique rhythmic movement of the pony under the guidance of a therapeutic coach assisted by someone who leads the pony and a side walker who watches the rider.  TR has been shown to be effective in improving balance, co-ordination, emotional control, self-confidence and self-esteem.  It has been used to assist people of all ages with a range of disabilities such as cerebral palsy, multiple sclerosis, learning disabilities, autism, Down’s syndrome, mental health problems and sensory impairments.

This event was organised by a working committee drawn from the Connemara Ponies Breeders Society, Paving the Way – a support group for people with disabilities and their families in Northwest Connemara – and Forum, our local development company.  The project, funded by the Leader Programme,  is a powerful example of an initiative which enhances social inclusion in an innovative way while promoting the world-famous Connemara Pony with its docile, responsive nature as a suitable equine for therapeutic riding.

The trainee coaches then demonstrated their skills in the arena first with the assistance of two enthusiastic volunteer riders, Laragh Gray and Roisin Walsh, both transition year students at the Clifden Community School.  Soon there was a queue of children and young people eager to try this unique experience, including many ‘first-timers’.  Grace who is 11 years old and has Down’s syndrome thoroughly enjoyed her walk on horseback round the arena according to her mother, Sheila Herbert.

Parents praised the caring attitude and professionalism shown by the trainee coaches in ensuring that the children felt comfortable and relaxed at all times.  Instead of the usual saddle, reins and stirrups the rider sits on a roller pad holding on to two handles with feet dangling free and easy.  This allows the rider to have much closer contact with the movement of the pony.

Another feature which was a great success was the sensory trail which had been specially designed and set up for the day.   The beautiful paths and trees and banks of bluebells at Errislannan provided the perfect setting for the trail where the pony stops at stations along the way to allow the rider to feel various textures, hear different sounds or play a little game.  The sensory stimulation and integration provided by the trail is a fun and relaxing experience which is beneficial for balance, posture and coordination.

The Connemara ponies were not the only animal attractions at Errislannan.  The stable yard was turned into a mini petting zoo with miniature goats, pet lambs, bunny rabbits, a tortoise of character and a couple of very exotic alpacas.  There were oohs and aahs and squeals  of delight all round as children and parents enjoyed getting up close to these lovable pets.

Over tea and cakes, made by the Paving the Way parents, it was agreed that this experience had been an outstanding success and an indication of things to come in the future for therapeutic riding in Connemara.